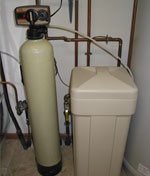 Santa Clarita residents who just can’t live without their water softeners are the only ones standing in the way of avocado and strawberry growers trying to eliminate chloride from the Santa Clara River watershed.

Local water officials from both the Castaic Lake Water Agency and the Newhall County Water District this week took part in a demonstration given by consultants hired to find ways of reducing the amount of chloride that ends up in the Santa Clara River Valley where thousands of crops are grown west of here.

Lynn M. Takaichi, of Kennedy/Jenks Consultants, explained ways of reducing chloride concentration in the watershed to 100 milligrams of chloride per one liter of water.

In his presentation, he pointed out that higher concentrations are allowable but that 100 milligrams per liter would not harm salt-sensitive avocado and strawberry crops.

“Chloride causes damage to foliage in avocados, strawberries and ornamental plants because it burns the tips of the plants’ leaves,” said John Krist, chief executive officer for the Farm Bureau of Ventura County.

“When it comes to growers of avocados and strawberries, the damage to leaves means a loss of vigor which reduces yield and that means a loss of revenue,” he told The Signal Friday.

Krist knows all too well that people using water softeners are to blame for adding extra salt to the ecosystem.

He said chloride added to the wastewater system because of water softeners combines with other salts introduced into the State Water Project system in the San Joaquin Delta to create a salt level that must be reduced.

Rex Laird, longtime agricultural advocate and former head of that county’s farm bureau, echoed those concerns and told The Signal Friday that the Clean Water Act of 1972 prohibits anyone adding anything to the water system that could be considered detrimental to those who benefit from that water system.

Paul Martyn, head of the Industrial Waste Section of the Santa Clarita Valley Sanitation District, is doing his part to convince people to part with their water softeners.

“I would estimate that between one in 11 households in Santa Clarita still have a water softener,” Martyn told The Signal Friday.

Since 2003, it’s been illegal for Californians to install a water softener. Residents who purchased water softeners prior to 2003 can keep them, but Martyn and others are trying to convince them to get rid of them.

A proposed measure to make it illegal to own any water softening system is expected to be included on the ballot this November election, Martyn said