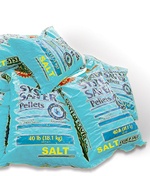 In their ongoing effort to put the Santa Clara River on a salt-free diet, sanitation officials plan to stop the sale of salt at local hardware stores.

Managers of local stores, however, tell The Signal they'll sell what they want.

"Not unless it's a city or county regulation or law - we won't stop selling it," said Andrew Masso, general manager of Home Depot on Newhall Ranch Road.

Eduardo Nava, general manager at Lowe's Home Improvement Warehouse of Santa Clarita, said he buys and sells according to decisions made at the company's head office in North Carolina.

"Something like this, whether we continue to sell (salt) or not, comes from the head office," he said.

Managers of both stores said they continue to sell 50-pound bags of the salt needed for water softeners.

In the latest move to halt salt discharge from in-house salt-based water softeners, and its release into the Santa Clara River, local sanitation officials plan to launch an outreach program soon to convince stores to stop salt sales.

"We want to move it to the next level and start looking at the salt itself," said Paul Martyn, spokesman for the Santa Clarita Valley Sanitation District of Los Angeles County.

"For those people getting salt still, we want to send a strong message to the community.

"We want to bring it to the attention of retailers," Martyn said, adding that he wants to post in-store signs by the bags of salt warning customers about the environmental implications of using it in home water-softeners.

Gallagher mentioned a similar situation in Denver, Colorado, where fire pits are sold despite an ordinance there prohibiting open flames in public.

Chris Ahearn, spokeswoman for Lowe's based in North Carolina, said: "We do want to comply with local and state guidelines. We would certainly listen to the regulators and evaluate."

The ban, called Measure S, made Santa Clarita Valley the first community in California to institute a ban intended to protect sensitive agricultural crops downstream in the Santa Clara Valley.

Measure S supporters argued that getting rid of existing water softeners will reduce the amount of salt that ends up in the Santa Clara River. Salt is harmful to crops such as the strawberries and avocados, which grow downstream.

Primarily dry most of the year, the Santa Clara is the last natural river in the Los Angeles region, not channeled with concrete, and stretches some 116 miles from the San Gabriel Mountains to the Pacific coast in Ventura County.

Although the law has gone into effect, water-softener owners still have a grace period of 180 days, during which time they can take advantage of a program to have their softeners removed free of charge and claim rebates between $206.25 and $1,500.

Since December, more than 1,000 owners of salt-based water softeners have taken advantage of the rebate program, Martyn said Monday.

"The ultimate goal is to get rid of the salt," Martyn said. "We've received quite a few calls about the rebate, more than 1,000 applications during December. So now we're trying to process those applications."

Rebates dropped to 75 percent of their initial value after Dec. 31.

Martyn has said repeatedly that he does not want to see his department become the "water softener police" but stressed he is serious about reducing the salt that ends up in the local ecosystem.

Homeowners who hang onto their salt-based machines after June run the risk of receiving a $1,000 fine